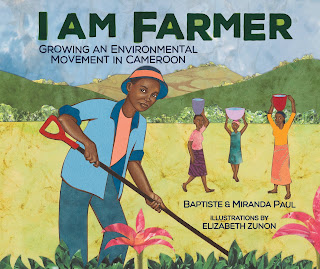 It's hard to believe the time is almost here for the release of this book! But before that happens,


On November 15, 2018, Tantoh Nforba Dieudonne went to the U.S. Embassy in Yaoundé, Cameroon to get his travel visa for the tour. The interviewer, without even looking at a single page of the book or his invitation letter, quickly denied his application, without a refund of any fees paid. Without getting much into details, there is much suspicion that the decision (made by a single officer) is largely due to political situations and prejudices within Cameroon that have nothing to do with the book or Tantoh's fulfillment of the requirements.

The GOOD news is that we can all do something to help. In fact, there are many things we can do. This isn't the first time someone in our industry has been held up by our immigration or border patrol (remember when something similar happened to Mem Fox?), but there is much hope that ordinary citizens can get this overturned in Tantoh's case. Please consider taking a few minutes to do one or more of the items on this list. We can turn a negative story into a positive one, so that Tantoh can still travel to the U.S. and inspire tens of thousands of elementary-aged students that, "No matter where you come from, you are never too small or insignificant to contribute to the long-term sustainability of our planet.”

We can't wait to see those smiling faces when Tantoh walks into gyms across America this spring! 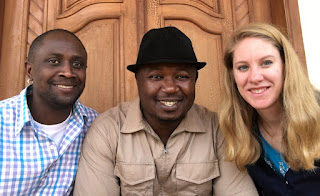 (Please feel free to customize or personalize each letter to maximize your impact!)

To find out who your local representatives are, check out this website.

For more about the book, visit this page.

For news about the current political situation in Northwest Cameroon, here is one overview.

Let's turn this story into a positive one.Thank you for your support! Merci beaucoup!

In 2017, I had three hilarious fiction picture books published: 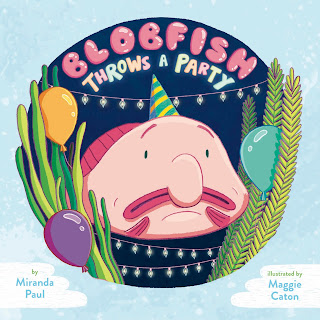 Blobfish went on to win several schools' Battle of the Books competitions, and even caught the attention of Scholastic, who ran a Blobfish giveaway! Happy to report it's selling in the US, Canada, and Australia. Available here. 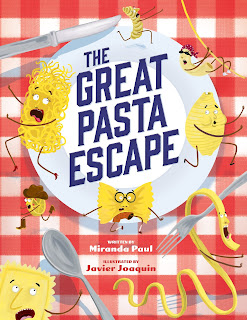 The Great Pasta Escape won a nomination from the Washington State Childrens' Choice Awards, so it's on the list there. Happy reading! If you're a Washington state teacher or educator and you'd like me to do a Skype author visit with your students, I'd love to (They're FREE!). I'd also be willing to come out there in person—Washington is one state I've not been to yet.

Are We Pears Yet?
(illus. Carin Berger) 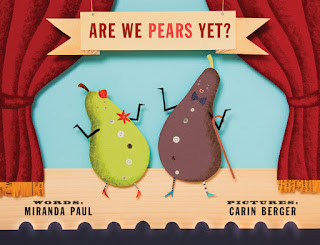 In September, Are We Pears Yet? released and it's been really fun to watch some young classrooms act it out. Did you know that my teacher resource page (at mirandapaul.com) has dozens of lessons, activities, and worksheets related to the books? Thanks to the help of Carrie Charley Brown, I was able to get even more resources for educators up on my website over the past year. Enjoy immersing your students in these wonderful extension activities.

UPDATE: Recently, I got the news that Are We Pears Yet? won the Award of Excellence from the Council on Botanical and Horticultural Libraries! I posted about it online at my Facebook page. 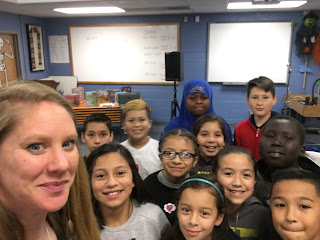 As usual, I visited many schools and libraries around the country—and world—over the past year. I even got to go as far as the England, Italy, and United Arab Emirates for the Sharjah Children's Reading Festival. Via Skype, I got to visited students from Canada to Hawaii to Tokyo! (So happy to learn that Water is Water is up for a Sakura Medal in Japan, too. Wow!)

This spring, our family also became a two-author household as my husband's debut picture book released into the world to great acclaim. Check out THE FIELD, by Baptiste Paul and illustrated by Jacqueline Alcántara. 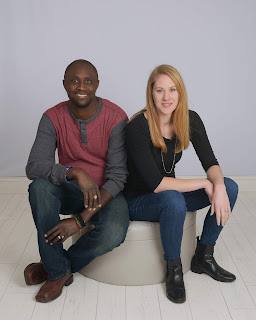 Later in the spring, my debut co-authored book came out. It's called Adventures to School, and I wrote it with Baptiste. So within the span of a few months, he's got TWO books out. We are certainly busy in this household, but we love making books for kids. 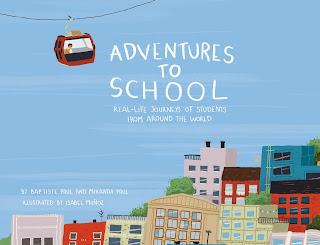 With so much excitement, our family is making plans to take a real camping vacation and a couple of day-trips in July and August. It will be nice to take a little R&R time before we head back out to visit schools in the fall, when my new book releases!

Check out MIA MOVES OUT, a sweet and silly story about a girl finding her place (literally and figuratively) at home. Illustrations by Paige Kaiser. Release date: October 16, 2018. 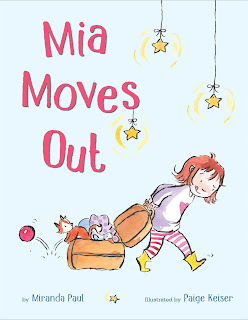 Looking ahead to next year, I'm already excited. I've got FOUR new picture books coming out.

You can visit my website to learn about them. All four are incredible projects that have been in the making for years and each holds a special place in my heart. I think that teachers, science lovers, and librarians will find them especially relevant for their students as well.

Thanks again for all the support. I probably won't be blogging again this summer. But I do send out a newsletter if you are on my list. If you're not getting my newsletter, please consider it. I post that once per month, as compared to this sorely neglected blog. It's the best way to get news, updates, writing tips, and teacher resources. Here's the link to sign up.
Happy summer, everyone! See you next school year!

Starting March 1st, we’re celebrating Women’s History month with 31 days of posts focused on improving the climate for social and gender equality in the children’s and teens’ industry. Join in the conversation here or Twitter #kidlitwomen and access all the #KidlitWomen posts this month on our FaceBook page https://www.facebook.com/kidlitwomen/

On and off for nearly a decade, I had the extraordinary pleasure of digging through school library closets for class sets of titles deemed relevant to a state curriculum for teenage students. Sometimes I got a choice. Here are as many of the “choices” I can remember from the three schools I taught at between 2003-2013.

(I want to note that this is not a commentary on the merits or talent of the authors or titles mentioned.)

Night by Elie Wiesel
The Lord of the Flies by William Golding
The Chocolate War by Robert Cormier
A Separate Peace by John Knowles
The Red Badge of Courage by Stephen Crane
The Scarlet Letter by Nathaniel Hawthorne
1984 by George Orwell
Animal Farm by George Orwell
To Kill A Mockingbird by Harper Lee
Romeo and Juliet by William Shakespeare
Hamlet by William Shakespeare
Othello by William Shakespeare
Macbeth by William Shakespeare
Oedipus Rex by Sophocles
The Good Earth by Pearl S. Buck
The Great Gatsby by F. Scott Fitzgerald
The Crucible by Arthur Miller
Fahrenheit 451 by Ray Bradbury
Death of a Salesman by Arthur Miller
The Grapes of Wrath by John Steinbeck
Of Mice and Men by John Steinbeck
Rosencrantz and Guildenstern are Dead by Tom Stoppard
Chronicle of a Death Foretold by Gabriel García Márquez
One Day in the Life of Ivan Denisovich by Alexander Solzhenitsyn
Master Harold and the Boys by Athol Fugard
The Iliad and the Odyssey by Homer
The Absolute True Diary of a Part-Time Indian by Sherman Alexie

One does not need pie charts to recognize that this list is dominated by male authors. But if you haven’t read the titles on this list, you might not recognize how many of these:
When teaching in between larger novel or drama units, you can imagine how much material I tried to incorporate in my lessons—possibly a futile attempt to balance such numbers. Poems, short stories, nonfiction essays, etc. were the genres I had more choice in selecting, and whenever I had the chance to add in a short story or poem by or about a female or a person of color, I did. But do these short pieces stick with students? Do they carry the same weight as spending weeks discussing a novel or play?

Back when I was a high school student, I went through my high school career without having to read a single female-authored novel or play for class. (Sadly, I couldn’t even imagine reading a book at school with an ENTIRE cast of females, or a book by or about a non-binary person or LGBQTIA content.) Even in middle school, the only female-authored book we read as a class was Lois Lowry’s The Giver—which features a male protagonist. We spent a lot of time on Tom Sawyer and Huck Finn, which left me hungry and it’s probably why I spent all of my babysitting money on Lurlene McDaniel and Diane Hoh series books, and read a tattered copy of The Joy Luck Club by Amy Tan twice before graduating high school.

Now that I have two middle graders, things are better, right? Here are the class reads they’ve come home with so far:

While I’m relieved they still do individual choice reading in middle school, I don’t have to do the math for you on the all-class reads. And although they read a wide array of contemporary novels by and about women (especially women of color) at home, the fact is that what gets presented to them in school is (consciously or unconsciously) interpreted as notable by society as a whole. More academic. More literary. Better. Important. And these titles get thought about, discussed, studied, written about, and absorbed by our students—who then grow up to become our society and form its culture and rules, both written and unwritten. What does this imbalance tell our girls? Or, perhaps of more consequence, what does it tell our boys?

What really baffles me is that I’ve only ever had one male English teacher throughout middle and high school. Truly, it’s females telling their students that these all-male (mostly white cis male) books comprise the literary canon worth a lot of our time and study.

Are you an English Language Arts teacher? What can you do about this?

Although smaller works don’t always get as much time or attention, the right poem at the right time could have a big impact on the right kid. Just like Marcie Hans’s “Fueled” opened my 14-year-old eyes with its words that completely related to a girl with almost no friends but a big love of nature.

Fueled
by a million
man-made
wings of fire-
the rocket tore a tunnel
through the sky-
and everybody cheered.
Fueled
only by a thought from God-
the seedling
urged its way
through thicknesses of black-
and as it pierced
the heavy ceiling of the soil-
and lauched itself
up into outer space -
no
one
even
clapped.

Now that I’m the author of several environmentally-themed and poetic books for children, it’s astonishing to look back on small moments like this. If you’re a #KidLitWoman, you already know how tiny moments of inspiration were all we girls had to grab on to.

(Action item: Please comment below, sharing a title of an MG/YA novel by and/or featuring female protagonists that would make a good all-class read for kids in grades 7-12.)
Posted by Miranda Paul at 5:03 AM 17 comments