The Summer of Pizza has officially begun!

Saturday's opening ceremony was a success – 29 pizzas and a calzone :)  Our yard and house was filled with more adults kids than I could ever have imagined, all in the name of peace, love, and pizza.

And, as promised, I'm firing up the pizza oven each week and baking a unique pizza inspired by ingredients or the pizza-stylings of a particular country.  This week, I took inspiration from my husband's homeland (and one of my adopted homelands), the island of Saint Lucia!

About ten years ago, I experienced tuna on pizza for the first time at a place called Shernell's down in Vieux-Fort, Saint Lucia (right near where Phyllis was spotted several weeks ago on her World Tour).  At first I thought that the restaurant owners were strange to offer tuna pizza, but the more I thought about it, the more I realized it was a pretty normal (and clever) ingredient choice if you lived on an island!

So, have a virtual taste of my tuna and cheddar pizza. 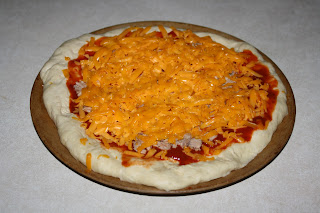 You and your kids can also enjoy the flavor of the Creole language by picking up or requesting a copy of this book - ALL KINDS OF...

It's a tri-lingual board book, offering short phrases and vocabulary in English, Spanish, and Creole.  My husband and I love it because books in Creole for our kids are very few and far between.  And we know the thousands of parents and children who visit Saint Lucia (and the other islands where Creole is spoken, like Haiti) would have an interest in learning a few words too!

Until next week...Where we'll be traveling to the Middle East for a special hummus pizza!

My initial reaction was tuna pizza? Hmmm... But then I thought about it -lots of people eat tuna melts - tuna, cheese, tomato, bread - practically the same thing :) I bet it's good!

You may think I'm weird, but I bet apple and red onion would do this pizza proud! (No kidding, that's what I add to my tuna salad sandwiches, and mayo, but let's not get yucky on a pizza!)

I absolutely LOVE your summer pizza celebration...what an awesome idea! Lucky you to have such a wonderful pizza oven (and husband).:)
There are probably a million, more or less, ingredients that could be put on pizza...I'm excited to follow your posts to learn the ones you pick!
I'm sure that just about anything would taste good on pizza...never thought about tuna...but why not.:)

I am genuinely intrigued by this. It seems like a tuna melt as the previous commenter said. I may very well have to try this. Crab pizza is very popular at the pizzerias around where I am.

@Susanna - yes, it's better than it sounds!

@Vivian...wait until you see what's up this week

Eastern Shore of Maryland. Straight across the Bay and a little north of old SMC