Any one else sick of campaigning?

In my state, there's a lot of polarization and bickering going on (I was actually hired to write a summary article about some of it last year.  Wisconsin has been making political history with the governor and recall situations here -- but I'll admit, I don't feel like living here is synonymous with being involved in breathtaking historical moments.  It's just tiring sometimes.

Perhaps one of positives that is emerging from all of the elections and campaigning, however, is that people are beginning to learn about politics, voting, and civic duties earlier on in life.

And since it's an election year, I'm sharing a Perfect Picture Book that delightfully introduces American politics to kids!  Plus, when I met the illustrator, she drew (on the spot) a picture of my daughter inside as President.   My daughter was so excited that she changed the title character's name to hers and did a school project on the book. 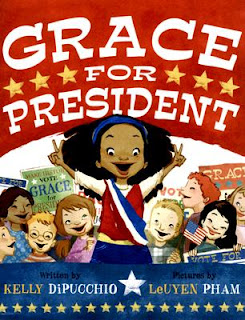 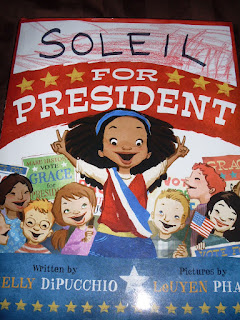 First Page:  One Monday morning in September, Mrs. Barrington rolled out a big poster with all of the presidents' pictures on it.  Grace Campbell (or, Soleil Paul) could not believe her eyes.  "Where are the GIRLS?"

Why I like it:  I've often asked the question "where are the GIRLS?" myself.  I also think that it's important that kids learn about politics and voting long before they're able to vote as well -- and this book teaches it in a way that is NOT BORING AT ALL!!

I also love it because my Grace looks a lot like my daughter.  And, to be honest, it's not easy to find picture books where the main characters look like my kids.  It's important to show them more than a single story (something I blogged about when I shared Chimamanda Adichie's TED talk awhile ago).

Resources:  Becky at 2nd Grade Rocks has an awesome comprehension guide and worksheet about Grace for President.  You can also teach your kids more about the electoral college at this website.  I'm sure you'll have no trouble coming up with even more resources by surfing the US government's website.

Here's the awesome drawing LeUyen Pham put of my daughter inside the book.  Pretty good, huh? 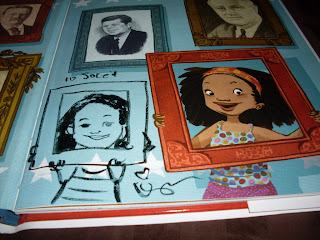 This book sounds SO good -- and what a thrill for your daughter to have the illustrator draw HER as a keepsake.

This sounds like a fun book. I've seen it up at the bookstore. Going to have to check it out before election day! Sounds fun!

What a great book and the perfect time to share it with all of our boys and girls!!

I continue to ask "where are the girls." We'll check this one out.

What a special keepsake, Miranda...I'm sure your daughter will never part with it!
Thanks for the introduction...I'll be joining you all in PBF's soon...

I LOVE this book! Such a great explanation of the electoral college and our voting system for kids.

What a cool book. I struggle to explain our political system to my very curious five-year-old. This might be a start. Thanks for the recommendation, Miranda.

I hope that your daughter continues to question the political status quo.

I loved buying this book for my daughter whose name IS Grace, just to show her that not all Graces are of the blond hair, blue eye variety prevalent in her elementary school!

Sounds like a great book! And "Soleil for President" has a splendid ring to it!

Ah yes! The perfect PB to highlight during the election year. This is a great book! BTW: I honored you in my blog. Stop by to receive your award.

YAY! -- I have never seen this book! And, we do need to see more books for girls involved in politics. Planting the seed early is important. Love your choice.

What a great gift for your daughter - a personal illustration in the book! This is an excellent choice to introduce politics to kids as it's dominating the news. Thanks!

Miranda...what a wonderful book for any time of year...but especially now with all of the political stuff in the media! I'm so happy for your daughter...the special inscription and illustration will be a lifelong inspiration. :) Great activities and resources as well...thank you for a super review!

What an awesome book! This needs to be in classrooms everywhere. Thanks for the great review.