Although I typically feature other moms on Mommy Monday interviews, today I'm writing to tell you that Sylvia Ramsey's recent interview of me is now posted on her Thoughtful Reflections Blog!

Please stop by and learn more about me, some of my 2011 releases, and current projects.  Thanks for taking a moment to read and comment on the interview, Happy Monday and safe Trick-or-Treating! 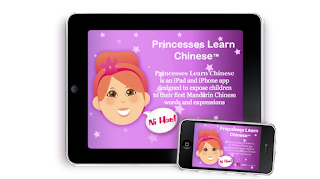 Recently, another App company for whom I write (Early Languages, LLC - a member of Moms with Apps) has released a new interactive book for kids (well, girls, mostly) - called Princesses Learn Chinese. 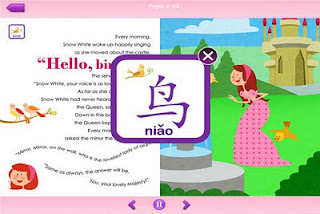 I'm excited about the Princesses Learn Chinese App for a number of reasons (other than the fact that I helped adapt the fairy tale stories in them).  First, the company's founders have a genuine love of languages and an inspiring background rooted in education.  Secondly, the App comes with so much more than just stories - there are games (like Bingo), songs, and even fun drawing pages (that teach the colors in an ingenious way!).  Thirdly, considering the fact that within three decades or less, the majority of Chinese youth will be speaking English, the App isn't just a great tool for those learning Mandarin - but it can easily serve both Chinese and English-speaking populations.

Enough analysis, though - what did my kids think? 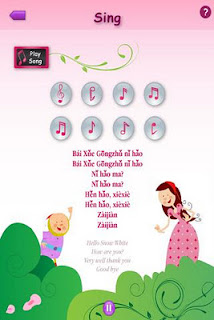 It was a huge hit with my 5-year-old, plus there are several activities suited for my 2-year-old as well!  My daughter hasn't stopped singing the "Ni hao ma" song (How are you, Snow White?) since we downloaded the App.  And, she memorized it in a single sitting.

The illustrations are bright (and girly) and my daughter is once again excited about learning Mandarin (she took nearly a year off where she 'wasn't interested' in practicing).

If you have an iPhone, iPad, or iPod, download Princesses Learn Chinese in the Apple iTunes Store (FREE) and let me know what you (or your kids) think!

Don't let my kids know I used the word "poop."  Although right now, I'd welcome a "time out."  At least I'd get to sit down!

These days are a bit hectic - as many of you know, I'm back in the classroom full-time for awhile.  So, on some nights, that translates to 150 essays to grade.  On other nights, lesson plans or fidgeting with Skype to make sure tomorrow's distance guest-speaker presentation goes on without a hitch.

Top it with the usual writing assignments, serving on two committees, and trying to be a good mommy and wife and voila!

There's no lesson today.  Just the raunchy smell of being too busy.  (I hope to clear the air soon).

Sorry for the rant.  Three weeks until I can take a fresh breath again :)

Thanks for listening (or reading...whatever blog fans do).  I appreciate it.