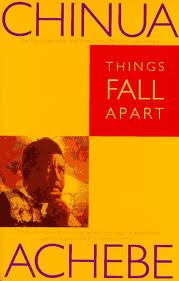 Currently, I'm reading (well, re-reading) Things Fall Apart by Chinua Achebe.  As Onkonkwo's world was unraveling, I made an attempt to organize my own life by posting my "Eleven Things to Do Before 2011."

And what did I learn?  That as soon as you know, specifically, what you want to accomplish - it happens much faster.

A few hours after I posted my list of to-dos before the end of the year, my husband came home and told me he's stopped by the library on a whim just to pay off his $6 fines.  So, #6 was quickly scratched off my list.

Then, I sent an end-of-the-day email to my editor requesting electronic copies of all of my articles that went to print in 2010 for a few print publications (clippings are nice, but they fade).  She emailed me right back saying she'd have the files to me by the end of the day (note:  the list was long!).  And, furthermore, she delivered on her promise.  #1 is nearly complete, and it's the one I considered the most difficult.

Clearing the clutter and Backing up my files (#4 and #8, respectively) were a cinch and checked off over the weekend.

So, after a few thank you notes and expense reports get written up, I've only got the "fun stuff" left on my list to end out the year.  Thus, "Things Come Together" is how I plan to title the last chapter of my life in 2010.

Oh, and if you've never read any of Achebe's works, I'd recommend adding one of his titles to your own to-do list!  Happy New Year!
Posted by Miranda Paul at 7:55 AM