Worldly Wednesday: The Fish Snatcher and Other Wolof Folk Tales 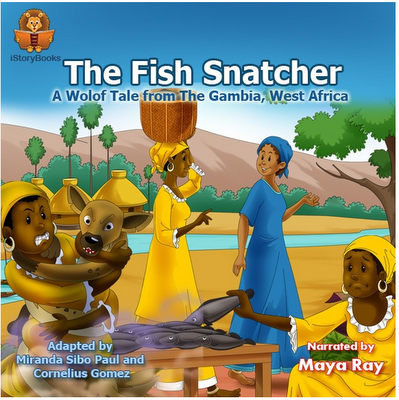 Very recently I got to see the first finished product of a long-term project of Cornelius Gomez's and mine - adapting Gambian oral folk tales into accessible picture books for American and English-speaking children around the world.

Cornelius Gomez is a Gambian educator and one of the few who have published Wolof folk tales from his native country of The Gambia in West Africa.  Working with Cornelius, who currently lives and works in The Gambia, has been instrumental because I feel as though our collaboration has helped us acheive the goal of remaining both culturally authentic while still adapting the stories for new audiences (and target age groups) abroad.

Of the first three Wolof folk tale adaptations contracted by iStorybooks, The Fish Snatcher was the earliest release from the publisher.  Originally dubbed with the English title "The Old Woman and the Thief," this Gambian folk tale combines fear, humor, and common-sense morality into a short tale that interlaces cultural (Wolof) words and images.

Two more Wolof folk tales will be released in coming months from iStorybooks.  Cornelius and I are also seeking a publisher for the bilingual version (Wolof and English) of a compilation of adapted folk tales so that our stories can be used in both Gambian and American classrooms.  It's not an easy task, but as they say in Wolof:

Naka ligey be?
("How is the work coming along?")

Ndanka, Ndanka.
("Slowly, slowly." And don't forget to laugh while you respond).

I hope you enjoy The Fish Snatcher!  And, I'll keep you posted on the publication of other Gambian folk tales.
Posted by Miranda Paul at 4:00 AM

Congratulations, Miranda! It's interesting that these bilingual books are actually for use in different countries rather than within the same country.