Recently, I completed a fun (and challenging) task of editing two African folk tales written by Tokunbo Ifaturoti, also known as Auntie Toks.  She's one of the creators of the hit TV programme “Time Out with Auntie Toks," which airs on weekend mornings in London.  'Auntie Toks' also is the founder of the Lighthouse Children's Workshop Production, an organization dedicated to fostering appreciation of cultural diversity.


The Monkey and the Peanuts is a Nigerian folk tale in which King Musa loves everything in his kingdom except for foolish monkeys!  In the story, children will find out what happens when King Musa's path crosses a sneaky monkey out to steal his prized peanuts. 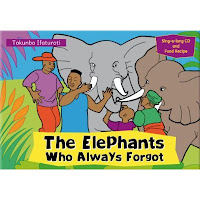 The Elephants Who Always Forgot tells the tale of the Akelo elephants of Kenya.  They are the strongest animals in their village, but they’re also the most forgetful.  So in exchange for their hard work, the Kenyan people constantly remind the elephants of their strength.  That relationship comes in very handy when  hunters spy their long tusks and attempt to poach them.  And their forgetfulness also comes in handy with a surprise twist at the end!

What's especially neat about these books is that they come with authentic cultural recipes, and there are additional workbooks that can be purchased to go along with each book (note:  workbooks and colouring books are in UK English - but still fun and appropriate for American kids).

If you want to learn more or order these African folk tales from Tokunbo Ifaturoti's website, here's the link!
Posted by Miranda Paul at 9:28 AM

Sounds interesting, Miranda. I'll have to check them out.

Thank you very much Miranda! Children and their families absolutely love the books.