Is the Story of the Three Little Pigs Racist? 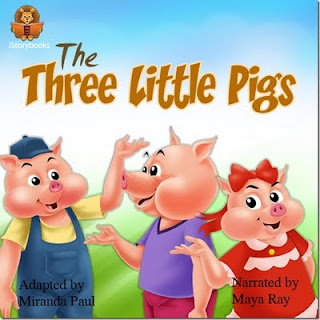 This morning, an "anonymous" reader on my blog posted a comment that The Three Little Pigs is "overtly racist."  Wanted to cry.  I could have just deleted the post, of course, but anyone who knows me understands that I am a person of integrity and would never want to squash a legitimate debate over something as close to my heart as discrimination against anyone.

A few months ago, I was hired by iStorybooks to rewrite the old, public domain version of The Three Little Pigs.  I modified Andrew Lang's story of The Three Pigs from The Green Fairy Book.  As usual with retellings, my assignment was to make it suitable for children (2 sentences or so per page, appropriate vocabulary) without changing too much from the original tale.

In Lang's version, the pigs are Browny, Whitey, and Blackey.  The pigs were distinctly different colors (although pigs/sows/hogs naturally are), and all boys.  I didn't think that was very appealing.  So I changed the story so that the pigs all became pink (you can see the illustrations) - one color.  But I did keep the name Brownie for one pig, because he liked to play in mud (the one who built his house of mud and straw).  Hence, he is always the color of mud in my text.  I wanted at least one character to be a girl, so I made the middle one (who, in the original tale, is very greedy and actually built her house of cabbage) a girl and named her Pinky (perhaps that's a gender stereotype?).  I didn't take out the fact that she was very greedy.  I named the wisest pig Max.  He has no color reference whatsoever (I kept the names Blackey and Whitey out of the story).

Obviously, I considered my retelling to be much cleaner and sillier than the original.  And, I had nothing to do with the illustrations, but you'll see that all pigs are the same color (pink).  Brownie is just usually covered in mud.

Is my retelling racist as the anonymous comment accuses?  Obviously, I didn't write it that way (hello...we are a brown, black, and pink family...)?  Or, is the original story racist (even though Blackey is the wise pig)? What do you think?  Is the original story or my retelling sending bad messages to children? Or does the overall message of hard work, planning, and sharing prevail?

So far, I've gotten nothing but good reviews and comments on the book.  But I am curious to know what others think about the reader's post that the book is "overtly" racist!

Sadly, I think sometimes people hunt and search and make things racist, or sexual, or religious, when they are not and never were intended to be that way. Sometimes colors are just colors. There are no bad emotions attached. Very well written post.

People can make just about any story appear racist. People see what they want to see--or don't want to see. You know you didn't write the story to be racist, so I wouldn't worry about one comment.

Thanks, Kelly. A lot of friends, family, and readers were shocked by the accusation. But the support that has poured in has been overwhelming. I appreciate your post.